Choose a Servermania Dedicated Server if you need outstanding stability, premium performance, unimpeachable security, and management services from the most experienced support experts and system administrators in the business.

GUARANTEED PROTECTION AGAINST ANY TYPE OF ATTACK

In partnership with an industry leader in DDoS protection, RioRey, ServerMania has equipped our network with the most sophisticated appliances to protect against disruptive cyber attacks.

WHEN DATA RAINS, DONT GET FLOODED

Q1 of 2017 saw a 26% increase in DDoS attack size over the previous quarter. Each year, these attacks are becoming larger and more frequent. ServerMania’s DDoS protection services provide coverage against any type of attack.

Account security:Our security team monitors your systems and accounts for threats and vulnerabilities 24/7/365.

Network Security:Our networks are locked down on multiple logical layers using a variety of methods, including private networking.

Server security:We have protection, monitoring and app patching in place to ward off server attacks.

Every server on the internet is a potential target for a devastating DDoS attack. These attacks use a variety of tactics and large volumes of traffic to bring down your website, often with the request of a ransom in return for the attack being stopped. ServerMania’s DDoS appliances provide front-line protection against the most harmful attacks against your online presence. Our protection services will instantly engage during an attack, dropping all attack traffic and routing legitimate traffic to your server. This ensures your services remain online at all times during an attack. 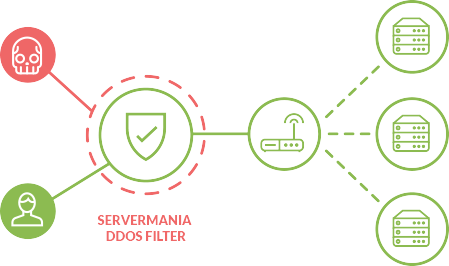 Our enterprise-grade DDoS protection service protects against the most common DDoS attack types, including:

Our DDoS protection is compatible with all server applications. Common applications include:

Our DDoS protection uses the latest and most effective methods of detecting and dropping attack traffic.
These techniques are regularly updated as DDoS attacks evolve and become more sophisticated, ensuring your business is protected at all times.

NOT QUITE SURE WHICH DEDICATED SERVER IS RIGHT FOR YOU?